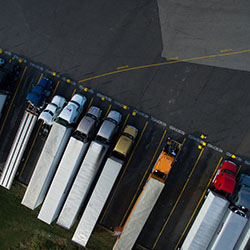 Mike Hasinec, vice president of maintenance support for Penske Truck Leasing, said APUs cost anywhere from $7,000 to $12,000. However, that cost is easily recovered in fuel savings alone. “In a normal week, a driver spends 40 hours in the sleeper berth. You’re going to burn an average of 1 to 1.2 gallons per hour idling,” he explained.

Given the price of diesel, that could add up to about $147 a week. “ROI from a fuel perspective takes about a year and a half,” Hasinec said. Fleets can choose either an electric APU that runs on batteries or a diesel-powered APU that runs on a small diesel engine that burns about 0.2 gallons per hour. “If it is a diesel-powered APU, you have to change oil, filters, belts and coolants. So there is a small cost associated with that maintenance.”

When leases are included as part of a full-service lease, Penske provides all maintenance on the unit. “It costs a little more, so it may take 2.5 years to recoup the investment cost,” Hasinec said.

Hasinec said there are pros and cons to each type of APU. “With the electric APU, the challenge has been how long the batteries last before the system cuts off. If you’re running the APU in Arizona where it gets hot, the typical electric-powered APU may not last all eight hours whereas a diesel-powered one, which does cost more, can run indefinitely,” he said. The electric is a little less to purchase and maintain and meets CARB regulations because it isn’t an engine, so the APU doesn’t need a diesel particulate filter.

Although APUs add weight to a tractor, the Department of Transportation gives a weight allowance so it doesn’t affect the size of the load. “They give you up to 400-pound weight exemption. If you have 80,000-pound limit, you can have 80,400,” Hasinec said.

The aftertreatment technology on today’s heavy-duty trucks does not like idling. “When the engine is idling, it isn’t running under normal operating temperatures, which creates additional soot and hydrocarbons that impact the aftertreatment systems and how hard it has to work to keep NOX and other emissions out of the air,” Hasinec said, adding that as a result, the diesel particulate filter has to be cleaned more often. Hasinec said APUs can also extend the life of an engine and the components associated with it, such as turbo chargers and injectors. “In the grand scheme of things, it impacts vehicle maintenance,” he said.

APUs also give drivers options for keeping cool or warm while meeting strict idling regulations in certain parts of the country. That may take on greater importance as the driver shortage worsens and fleets work to attract and retain drivers.

Penske can help fleets understand driver idling time through data coming off of the engine. Penske can track the data and present it to fleets so driver managers can use the information to coach drivers. “Idling is literally a waste of fuel,” Hasinec said.