Kenergy, a Touchstone Energy Cooperation, is a member-owned, not-for-profit electric company that purchases electric power at wholesale and distributes it to its members, which include nearly 58,000 households, commercial enterprises and industries in 14 rural western Kentucky counties.

In mid-2005, the company’s CEO asked Doug Hoyt, director of procurement and contracts for Kenergy, to address several issues plaguing its 136-vehicle fleet. “We were asking our technicians to take care of vehicles made by different manufacturers without giving them the proper tools, training or diagnostic equipment to do the job,” Hoyt says.

To gain that expertise, Hoyt chose to outsource Kenergy’s fleet maintenance to Penske. “There was a learning curve, both with Kenergy and Penske,” Hoyt said. “But Penske really took their time to get to know our business.” 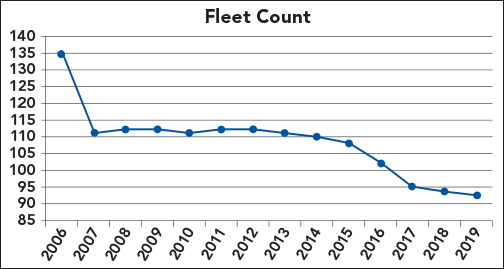 Prior to partnering with Penske, Kenergy realized a high number of its vehicles were sitting idle and in need of repair. So, Penske brought technicians to work inside Kenergy’s shops. They repaired those unused vehicles and instituted a rigorous preventive maintenance program. In just 18 months, Kenergy reduced its fleet by 25 vehicles. “That reduction was a direct result of having more uptime thanks to getting those vehicles serviced by quality and properly trained technicians,” Hoyt said.

Another reduction came in 2014, as Kenergy’s pre-Penske vehicles reached the end of their lifecycle. Today, Kenergy’s total fleet is 93 vehicles—over 30 percent less than in 2006—despite the fact that the company serves about 8,000 more members today and maintains the same number of linemen and servicemen.

In the early 2000s, Kenergy would keep large vehicles for an average of 10 years regardless of condition. “Now, with Penske, we are keeping vehicles longer and maintaining the resale on those vehicles,” Hoyt said. From 2007-2018, the average age of Kenergy’s fleet increased by 52 percent. Kenergy also increased its average fleet mileage from just over 80,000 miles in 2007 to nearly 104,000 miles in 2019.

While Kenergy’s fleet maintenance improved, the cost of that maintenance grew only incrementally—by a little more than one percent annually from mid-2005 to 2018. “To have that small of an increase over 14 years is amazing,” Hoyt says. “We’ve successfully kept maintenance costs low as we’ve become a much more efficient team.”

Perhaps the biggest “hidden” benefit, Hoyt said, is the deferment of capital expenses thanks to having a well-maintained fleet. “Utility vehicles, such as a digger derrick, cost $169,000 in 2006. Today, this vehicle costs $281,000,” Hoyt explained. Kenergy used to purchase a new digger derrick every 10 years. Now its vehicles last longer. “I’d estimate we’ve deferred multiple millions of dollars in capital expenditures,” Hoyt said.

Penske remains focused on ensuring workforce safety and productivity for Kenergy associates. “Our employees rely on our vehicles to operate perfectly,” Hoyt said. “Everything must function as designed to keep our workforce safe,” Hoyt said.

As an energy provider, Kenergy must respond in weather disasters. Kenergy aided in the recovery of hurricanes Ike (2008), Harvey (2017) and Irma (2018).

Kenergy also relied on Penske during its response to a 2009 winter storm that knocked out 95 percent of Kenergy’s electrical lines. Kenergy initially deployed nearly 100 lineman and 100 trucks, but the massive job required 1,000 lineman and 300-plus trucks.

To help, Penske provided additional technicians, bucket and pickup trucks, a full moving van of tires, and additional tools to ensure the vehicles were fully operational. “We knew at that point our relationship was on solid ground because when [weather] conditions deteriorated, Penske’s value really shined through,” Hoyt said.

“We are in the energy business; Penske is in the transportation business,” Hoyt said. “I didn’t fully understand the importance of fleet management in 2005, but Penske did and they have proven to be a great partner ever since.”

“I’d estimate we deferred multiple millions of dollars in capital expenditures.”
— Doug Hoyt, director of procurement and contracts for Kenergy

5 Benefits of a Sustained Lifecycle Strategy

Thanks to rigorous preventive maintenance through Penske, Kenergy:

Penske brings you industry news, trends and regulations, written for fleet owners and drivers with input from transportation experts.

Take a look at how Penske works behind the scenes to help organizations across America.

See what we've done—from expansions to improvements to partnerships.

See how these companies rely on Penske to manage their fleets.